The Northeast Ohio Four County Regional Planning and Development Organization (NEFCO) was formed in 1974 as a regional council of governments by the elected officials within the Counties of Portage, Stark, Summit, and Wayne. 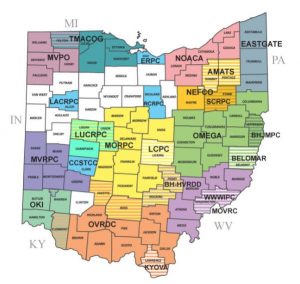 them. NEFCO also serves as a forum through which local, state, and federal planning programs can be more effectively coordinated.

In 1973/74 Governor Gilligan proposed the creation of sub-state districts for the entire state, which would be termed regional planning and development organizations (RPDOs). During that time, local leaders in the Akron/Canton area were meeting to discuss the possible establishment of a multicounty planning agency for the area. This new entity would not duplicate the planning, zoning, and land subdivision work that the existing single or multicounty regional planning commissions in the Summit County and Stark County area had done for years. Rather, this new organization would take advantage of the tremendous increase in federal funding availability caused in part by the passage of several federal acts, including the Clean Water Act, Housing Act, etc. It was thought by the leaders that a multicounty organization could attract more of this federal funding than a single county could. The creation of this new RPDO would follow the boundaries of a sub-state district proposed by Governor Gilligan, and NEFCO was officially formed in May 1974.

The NEFCO governing board quickly hired an Executive Director and began hiring staff, including several employees from the Tri-County Regional Planning Commission (Medina, Summit, Portage Counties). NEFCO considered and applied for many federal designations and grants, on behalf the local governments within its four counties. Several of the designations and grants commonly associated with NEFCO’s current activities were awarded during the first few years of the agency’s existence.

NEFCO is a member of the Ohio Association of Regional Councils (OARC).  Regional councils have been an integral part in helping various state administrations over the last two decades implement their programs and policies at the local level, including transportation, job development, environmental protection, housing, weatherization, and local government collaboration. Bringing varied interests and parties together is a hallmark of the regional council.